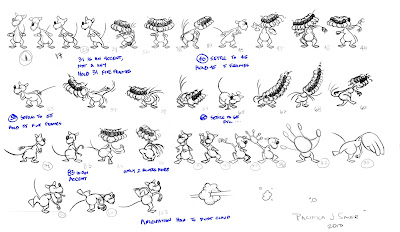 I needed a way for this rat to zip around looking for whatever before he snatches this piece of cheese from the trap. First instinct is to inbetween it the "regular" way- using exaggerated squash and stretch frames and a couple of other tricks. But you run into problems immediately. There is not enough time for anticipation, the turn takes too long, you can't read the accent before the transition, you don't get the zipping around visual... So Tex Avery back in the day was experimenting with a three drawing run with blur frames, and he had a character who zipped from one pose to the next. This idea was later built upon and evolved- Chuck Jones had his distorted version of transitional inbetweens (probably one of the more famous). So I spent a couple of weeks dissecting Tex Avery's formula- 5 frame virtual hold on the accent with a cushion back, using three blurs (combining the anticipation, the inbetweens, and the follow through). 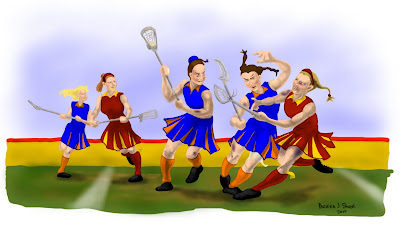 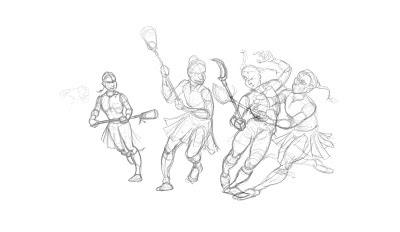 Look what life drawing did for me...
Was inspired by a friend's drawing (Amanda Dockery) that exists but isn't finished yet (that I know of). I've been playing around with some of Vilppu's composition classes, so it seemed like a viable project. Of course, it started as a sketch and evolved from several references (mostly women's rugby for the interactive poses).
Posted by pacsauer at 15:23 No comments:

pacsauer
United States
Hey! I'm an Emmy Award Winning producer-editor, I work in television, and this is my blog. Telling stories and getting to hear them is one of my favorite things in life, which keeps me in this industry. Sometimes I share some of my experiences here. Please visit my portfolio website for a look at my show reel.