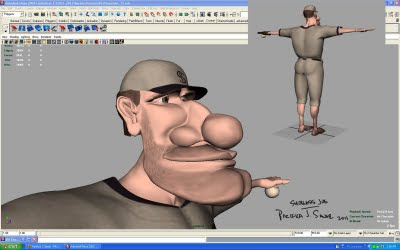 Decided I'd tear up my shoulder this weekend. Thinking about gnawing it off, the pain is maddening. That's one way to get a girl to take a break...
More on Joe and his dirty feet. Decided to go with nCloth for baggy uniform and use a nurbs surface for hair instead of both. Started by just using a texture map on the scalp for hair, but he ended up looking too much like Obama, and that was not okay. Still painting it up in Mudbox, and now that I have some down time, I can experiment with cloth. 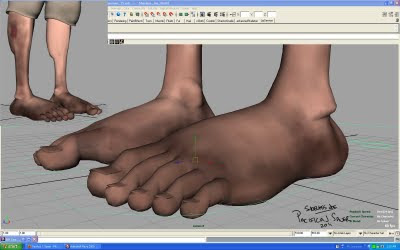 Posted by pacsauer at 02:31 No comments: 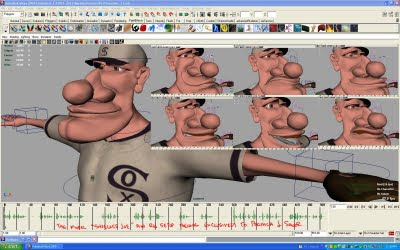 After tirelessly painting weights and managing all the driven keys, Shoeless Joe, my cartoon baseball player rig, finally has expression. He's a hybrid rig- a mixture of joint systems, deformers, and technical expressions. There's squash and stretch on the arms and torso. Boolean toggle for the mitt visibility and controls. Double hierarchy for driven/manuals keys on the facial controls. There's not a single blendshape. Not to mention a little help from a Comet Script called Pose Deformer/Pose Reader... and a beta called LipService. And it's a good beta! Lip Service is a product by Joe Alter that "is a powerful multi-resolution subdivision surface sculpting, rigging and animation system built into a Maya plugin. LipService's sculpting tools are comparable to ZBrush** and Mudbox*. Its animation tools extend this multi-resultion editing philosophy through to motion and rigging." So basically, no multiples of a hi-res mesh for blendshapes, and every pose is a golden pose- it will look good, because you can sculpt all of your corrections directly into your animation. Goodbye dozens and dozens of frickin blendshapes.

This is a lipsync rig test for Joe. Phonemes test for sentences in English. Recorded by Michael Hamm on November 3, 2003, with the aid of Mitchell Sommers in the Psychology Department at Washington University

Can a cat man a catamaran?

Come to calm.com!
It's a long time, and I mean long.

I teach Ferdinand the calm cat to fetch cold cups of coffee. Who knows more about tasting things? He's used the book. 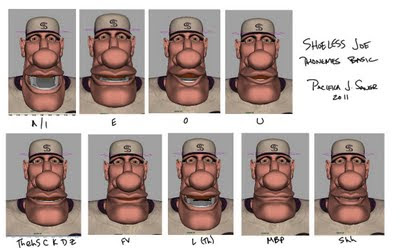 The rig has some more work to be done, mainly refining SDK and some other features I would like to include (hair and cloth). It's exciting for me to watch a project take on the fourth dimension. Time is the true test of integrity. More so I think with the things that we relate to as human.

Posted by pacsauer at 11:20 No comments:

pacsauer
United States
Hey! I'm an Emmy Award Winning producer-editor, I work in television, and this is my blog. Telling stories and getting to hear them is one of my favorite things in life, which keeps me in this industry. Sometimes I share some of my experiences here. Please visit my portfolio website for a look at my show reel.