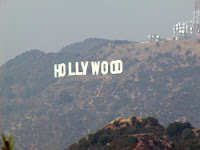 Tonight was the premier for our show "Sleepy Time Pals" at Chaplin Theater- a screening theater deep in the bowels of a place called Raleigh Studios on Melrose in Hollywood. From the corner of Bronson and Melrose, you have this view of the Hollywood sign on Mt. Lee. Across the street, you've got legendary Paramount Pictures. You may have never heard Raleigh Studio (Producer's Studio), but if you know anything about Hollywood, this is one of the oldest studios around. This place was here twelve years or so before Paramount. It's changed names a couple of times, but the Clune building is still there. You've se

en sets at Raleigh Studios if you've ever seen "The Closer" on TNT or maybe you watch "Private Practice." Parts of "Ironman" were shot here. Way back when: "Gunsmoke", "What Happened to Baby Jane." The place has atmosphere; it's fantastic. There are about a dozen different stages on the lot. A bunch of offices, equipment rooms, a large silver cow, trailers... there is a lot going on at this little place. Some of the pictures are pictures of pictures from my Blackberry (I left the USB cable on the computer at work and I'm too 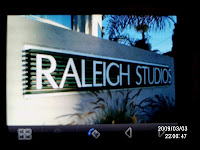 impatient to wait). I invited friend and designer (animation) Micah Lewis.
This is the sign on the corner of Bronson and Melrose. What's neat about this lot is you can see how the place has grown and evolved. The newest buildings on the lot kind of follow this design- with mirrorized windows. The older parts I think are the most interesting- the Bronson gate (below) has a lot of personality. Through it all, this place has made it's money renting stage space to other studios, which is brilliant. The theater is named for Charlie Chaplin, who was himself something of a living cartoon

character. It was a classic theater with the projector house, drapery hanging, the lights, the seats, and the place had a pretty good crowd.
The show was about 20 minutes. I worked on this a little less than a year, but I know it was longer than that in the making. Probably about 30 people or so at one point or another had their hands on it. A lot of work and anxiety and frustration and love goes into something like this. It's time away from your home, family, friends, pets, reality. Produc 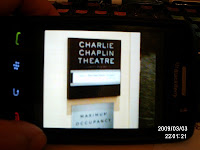 tion consumes your life, and when you 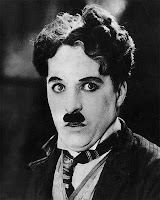 finally get to see your work on the big screen, all rendered with the textures and composited, and you can turn to your friend and say "that's mine...that's mine...this scene was ours..." it finally seems to be worth it. Sleepy Time Pals is a live action 3d composite cartoon designed to get kids in a bedtime routine. There were literally all age groups there to include a population of children, and I was impressed with the audience response. People laughed at the jokes

and the gags, answered questions to the viewers, and seemed to enjoy the story (The title is "Softbear has a Secret"). It's really a relief from the animator's perspective when you get the response you were hoping for in the theater. Success. When it's over, its nice to see your name in the credits, but the most rewarding experience for me is seeing the characters on the screen, and being convinced. My first Hollywood screening in animation was an incredible experience. Part of me wishes I could sit down and watch it again- or at least relive this experience, I feel super good

about my art right now. I had the opportunity to work with some very dedicated people, we threw our talents together for this project, and it came together very nicely. Awesome job, STP Production Crew.
Posted by pacsauer at 22:46 No comments:

If you're in Los Angeles, and you have some free time, hurry to The Academy building on Wilshire and check out these exhibits.
I personally can't get enough Chuck Jones. 'Nuff said.
Ray Harryhausen is inspiring as an animator- made me start looking at some serious stop motion stuff. Anyone remember the Clash of the Titans on TNT or TBS- old Turner network and all those mythical movies with the old school special effects? THIS is the man.

Chuck Jones: An Animator’s Life From A to Z-Z-Z-Z

Through August 22 – An exhibition of the work of Oscar winner and master humorist Chuck Jones, representing his short animated films, features and TV specials, including “What’s Opera, Doc?,” “Elmer’s Candid Camera,” “Beep Prepared,” “Duck Amuck” and many others. More

The Fantastical Worlds of Ray Harryhausen

Through August 22 – An exhibition showcasing the work of stop-motion animation and visual effects pioneer Ray Harryhausen (“It Came from beneath the Sea,” “The 7th Voyage of Sinbad,” “Jason and the Argonauts,” “One Million Years B.C.,” “Clash of the Titans”). More

Posted by pacsauer at 21:51 No comments: